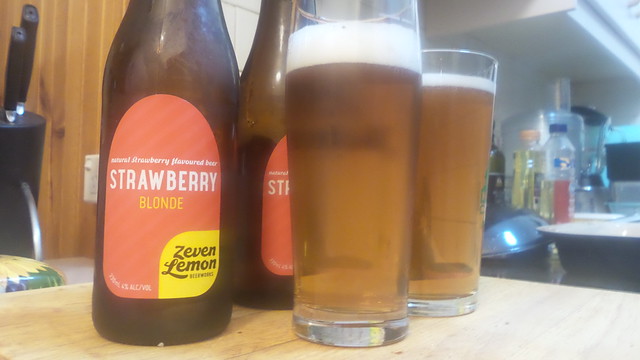 So … when the email hit my inbox about trying out the new Zeven Lemon Strawberry Blonde beer I was just a little hesitant. My experience with fruit beers is limited, to say the least. I’ll profess a certain acquaintance with Belgian Kriek which is brewed with cherries. But Kriek is just a little bit special. It’s a Lambic beer, which means it’s been brewed with naturally occurring yeasts (‘normal’ beer is inoculated with a usually specially chosen strain of yeast) and it turns out very very sour. To say it’s an acquired taste is something of an understatement. And it’s a taste I have not yet acquired.

However, Zeven Leven is an ale that’s been brewed with strawberry juice so I while I was confident (or should that be hopeful?) that I wouldn’t be faced with a super sour beer, I was still a bit nervous because sometimes this type of beverage can end up being overwhelmingly sweet. The beer comes to us from Sydney, where Leimin Duong, a self taught brewer, set up Zeven Lemon Beerworks (apparently Australia’s second 100% owned and run female brewery – does anyone know the first/other?). Duong did some work experience and created her development batches at Sydney’s St Peter’s Brewery and commercial production of her beer is currently handled elsewhere.

On the nose there is a very subtle hint of strawberry although I suspect you might struggle to pick this if you weren’t already aware of strawberry’s presence in the beer.

On the palate you do get an initial hint of strawberry flavour but it is balanced out very quickly by hoppy and citrussy beer characters. The beer does not come across as immediately sweet although the perception of sweetness does build over time.

I also made Andy try the beer. Because he is a lager drinker, it fell pretty flat with him. He didn’t like the hint of fruit, found the beer too sweet and complained that it was an ale.

So this is not a beer for die-hard lager drinkers, by any stretch of the imagination!

On the other hand, I was really pleasantly surprised by this and found it very drinkable. I liked the bitterness and the hops and I did not find it overly fruity. The way the sweetness builds up makes it very easy to drink one but that is where I personally would stop. I did spend over eight years in the UK drinking real ale, so it is not surprising that I found this quite likeable. Many of those beers are very fruity and can even have a sense of sweetness to them, so while Zeven Lemon is far fizzier than any real ale, it is not too dissimilar in flavour.

Zeven Lemon is just 4% abv and, in what is either good fortune or an excellent marketing move, it comes in 330mL bottles and so one bottle is … one standard drink. That kind of thing makes me happy – it also makes life a lot easier for anyone watching their alcohol intake.

If you are up for a little experimentation with your beer, and you don’t mind ales, then this is worth a go.