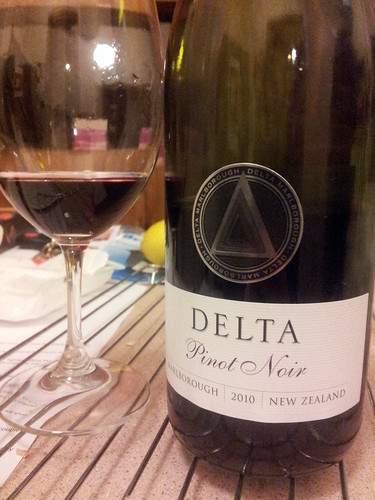 I think that this wine appeared on a Decanter list of wines. I’m no longer sure which one but I do love lists and so often with the Decanter lists they feature wines that are either unavailable here in Australia or so expensive that they might as well be unavailable.

This Delta Pinot Noir from New Zealand’s Marlborough region is widely available and comes in at about $25 a bottle. Delta is a relatively young winery – founded in 2000 – and it produces two Pinot Noirs (both available in Australia) as well as … a Sauvignon Blanc. The business is a joint venture between a Kiwi winemaker and an English wine distributor. In its short existence, the wines of Delta have been well reviewed.

As you may know, I don’t typically buy a lot of New Zealand wine, and I certainly can’t profess to be an expert on Marlborough Pinot Noir. I also find that the $20-$30 price point for Pinot is a really tough bracket. And not tough because there is so much competition but tough because I generally find it underwhelming. While I love discovering wines that over-deliver, I find this very rarely the case with cheaper Pinot and I suspect that because I expect disappointment, I find it.

So … how does the Delta Pinot Noir perform in the glass?

It is medium to pale in intensity and garnet in colour. The nose shows raspberry and strawberry, with a hint of smokiness and stalk and ever so slight spiciness.

The palate is very fruit forward (something very common with many ‘new world’ Pinot Noirs) and shows off red cherry much more than the berry fruit of the nose. There are some soft tannins providing structure and while there’s some good acidity, the flavour profile drops off quite quickly.

In this instance, disappointment is way too strong a word. This is a tidy wine which delivers very typical Pinot characteristics and does have some structure. Is $25 too much to pay for it? Well, if you are in the market for a Pinot then, no, it’s probably not – but can you find more exciting wines at the same (or even less) cost? Why, yes.

But would I be rushing out and buying it again? To be honest – no. In my overall wine world view, this doesn’t deliver at the price. I would be interested to try out Delta’s Hatters Hill Pinot – it’s almost exactly the same price but is the winery’s flagship wine. At home I have a fruit bowl and in that fruit bowl goes not only fruit but all the scraps of paper on which I’ve written tasting notes.

I do also have a tasting notebook but today the fruit bowl is closer and so, in what is best described as a lucky dip, I pulled out a pile of tasting notes that I’d written on wines I’d used in a WSET course. The notes are dated 19 August. That’s not 10 days ago – that’s 375 days ago. I’m sure that gives you some kind of insight into me … not entirely sure what it says though!

As a rule, I am not a fan of New Zealand Sauvignon Blanc. Not because I have an issue with them, per se, but they’ve become such a lazy choice for a certain type of drinker. I’ve actually been out with people who look somewhat crestfallen when there isn’t a NZ Sav Blanc on a wine list. Similarly, I hate that so often wine lists overlook good, local examples and yet feature a raft of second string NZ wines.

Little rant over. I am a massive fan of Greywacke. My first introduction to the brand was the Riesling (one seriously exciting wine there) and, as one of the required wines to teach at Level 2 is a New Zealand Sauvignon Blanc, this has become very much my go to wine.

Greywacke is run by Kevin Judd, a nice bloke, who also happens to be ex Cloudy Bay. He should know what he’s doing with Sauvignon Blanc. And he does.

While these notes aren’t on the current release, the few vintages I’ve tried have been pretty consistent of wines, so the following will give you an idea of what you will get, even if not an exact match. The wine is usually well received (and well liked) in class too.

In the glass the wine is very pale yellow. So pale that it’s almost water white.

As you’d expect with a Sauvignon Blanc, the nose is pronounced with pungent green pea and passionfruit, with hints of green capsicum, gooseberry and even a touch of the obligatory cat’s pee.

In the mouth, good acidity backs up a palate which shows a lot more tropical fruit. The passionfruit is definitely there, much more pronounced than on the nose and there’s just a whisper of green capsicum. Good length.

The current available release in Adelaide appears to be the 2012 which you will be able to pick up for around $25-$30 from good bottle shops such as The Ed Cellars and East End Cellars.

This wine was part of a mixed case we bought from some random on line deal. It was super cheap: I think it worked out at about $5 or $6 a bottle and the logic was that at least we’d have some wine kicking around the house for vinous emergencies.

It’s a Marlborough Sauvignon Blanc and was produced by New Zealand Wine Cellars. If you google that it won’t take you too long to figure out where we bought it from. Or just read to the bottom!

The nose was pronounced gooseberry with a hint of something vegetal – think asparagus or green pea, but don’t get too specific.

On the palate, the acidity wasn’t bad at all but it wasn’t very persistent. The palate was very green and wrapped up with a touch of passionfruit. The length was not great and for me the wine finished slightly hot, with a bitter edge which wasn’t that pleasant.

It was as though a lot of effort had been put into ensuring those typical primary fruit flavours were there, but not a lot of thought had gone into the wine as a whole.

This is a wine that absolutely delivers on typicity and I suspect that it does the job for die hard NZ Sav Blanc drinkers. I can’t utter any wise words about how it compares with other Savvy Bs available at this price point.

Clean, but boring and homogenous, and the finish really doesn’t work for me.

This wine was purchased from Cellarmasters, as part of a mixed dozen, average bottle price about $6.
Closure: screw cap.