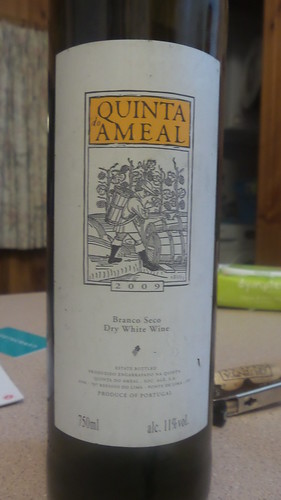 Over the Easter break we were headed to a large hardware shop which has a Dan Murphy’s nearby. Andy asked me if I wanted anything. I ummed and aahed and decided to stick my nose in for a look.

Generally, I loathe (and no, that’s not too strong a word for it) browsing in a Dan Murphy’s. I find it depressing and demoralising. Our local Dan’s used to have the wines organised alphabetically by producer (I kid you not) and while that has changed I still find the layout confusing. To one side of the store you have ‘Fine Wine’ and on the other … the ‘not fine’ (I guess). There seems to be no real logic to what constitutes fine or not (it doesn’t appear to be price) and while there is a lot of wine in store, I always find the selection rather limiting. It seems to be a repetition of the same old same old. Rows and rows of Shiraz or Sav Blanc but very little in the way of quirky wines or grape varieties. I just checked and at present, our local store does not stock one single bottle of Fiano.

I’m also not a fan of the lack of service. With wine, I can never make a decision so I like wine shops where I can go in, have a chat, perhaps talk about wines I’ve liked in the past and then be introduced to something new. This doesn’t mean I only ever want to drink small batch boutique production wine, which I realise isn’t Dan’s thing, but I want someone in the store to have knowledge of the stock and actually sell me something.

Anyway, I headed in to Dan’s with all these really negative thoughts whirling around my head and then … a large table set up near the entrance caught my eye. I’m not lying when I say it caught my eye because it was loaded with Burgundy and I could see the bottles bore the orange and white markdown labels. It turns out it wasn’t just Burgs and I managed to snaffle an interesting selection of wines, including this Vinho Verde from Portugal.

I’m very excited to write about this. This is not a wine you see kicking around in every bottle shop or on every wine list. In general, I think that Portuguese still wines are massively underrated (and, if you live in somewhere like the UK, they used to be massively under priced!) and, as a bonus, they’re often made from grape varieties that you don’t find on every street corner.

Vinho Verde is a Portuguese DOC located in the north west corner of Portugal and its name is Portuguese for ‘green wine’ as it is generally sold (and consumed) young. A Vinho Verde may be made from a range of white grape varieties, but this Quinta do Ameal is made from Loureiro. There are only around 6000ha of Loureiro planted in Portugal, pretty much all of those in Vinho Verde.

Now, keen readers will have noticed that I mentioned that Vinho Verde typically is drunk young – and in my book a 2009 doesn’t count as ‘young’ in 2015. However, I still came to it with an open mind and I was really very pleasantly surprised.

In the glass it was really heading towards a slightly more gold colour, so it was definitely starting to show some age. Nothing that alarmed me though.

The nose was reasonably pronounced, and had some slightly floral characteristics which are, apparently, typical of a young Loureiro. It also showed pear, and raw cashew nuts.

The wine had good acidity (these wines are typified by high acidity) and while I didn’t get any floral notes on the palate I did get pear, pineapple and grapefruit and the wine finished with a slightly more savoury, nutty note. There were also some herbal and aniseed characters there too. The length was not bad at all.

For a wine which I was expecting to be noticeably past its best I was really pleased with this. It went beautifully with our spicy Singapore-noodle style prawn dinner, and drank well on its own.

It didn’t look quite as impressive on the second day and was definitely showing its age a bit more but it was still more than fine to drink.

I actually thought this was pretty good value for money, and I enjoyed the wine, but I wouldn’t be paying around the $30 mark for a back vintage. I’d really like to see this wine in its prime so if you’re interested in trying it – I’d make the effort to seek out the 2013.

Quinta do Ameal is a very well regarded producer of Vinho Verde so definitely one to keep an eye out for.