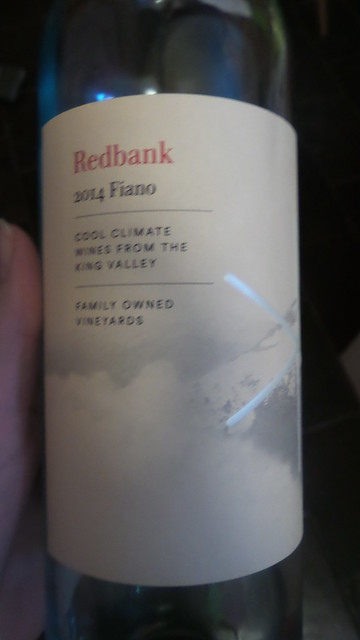 I am a huge fan of Fiano, so it comes as a surprise to me that I am yet to write about a wine made from this grape. The bulk of my exposure has been Adelaide Hills, so that’s the style I’m used to and, dare I say it, expect.

For those not in the know, Fiano is a grape which originates in Italy (you could never have guessed, right?). In Campania in southern Italy, to be precise. In modern Italy it is not massively widely planted but it is responsible for the DOCG Fiano di Avellino and you may also find it in a few DOC wines. It’s also planted in Sicily (is there anything that isn’t?!). Hopefully you’re seeing the part of the picture that means it’s suited to Australia … the climate.

I’ve found that, as a rule, Fiano is a rich, textural wine – great mouth feel and strongly flavoured. If I were going to align it with a wine that’s more broadly recognisable, I guess I’d start hedging towards Chardonnay mainly for the weight and feel aspect. But to be honest I can’t really think of an easy analogy.

This wine hails from Victoria and at first I was a little taken aback because it wasn’t exactly what I was expecting but it definitely grew on me and, perhaps more importantly, it’s a tidy wine. Personally, I’m quite keen to find the time to line this up against one of my Adelaide Hills favourites and taste them blind. No doubt I won’t be able to pick the geographic difference!

In the glass, the wine was pale gold. The nose wasn’t particularly pronounced but showed fresh pear, citrus and a hint of cut grass and even tropical fruit.

In the mouth, there’s good acidity and that lovely rich mouthfeel I was expecting. The flavours are quite rich too and the wine shows pear, spice and some aniseed and even aniseed sweets and good length.

With an RRP just over $20 this is a wine that, while it wouldn’t be my first Fiano pick (and let’s face it, I am a South Australian … ) it would definitely be a wine to which I’d be happy to return. Redbank is distributed by Negociants so it should be widely available.