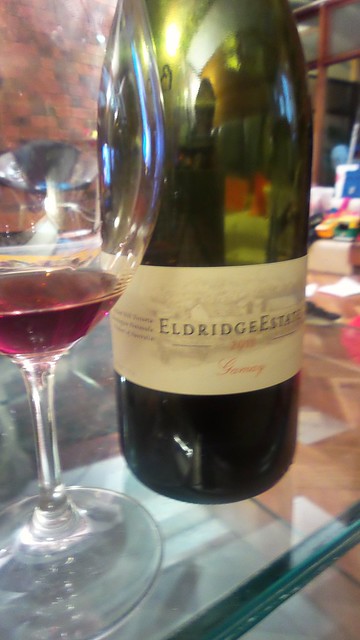 Gamay from Eldridge Estate on Victoria’s Mornington Peninsula.
Purchased at auction for silly cheap. The current release (2014) is sold out but was $40.
Closure: screwcap.
Alcohol: 13% abv.

It’s probably been well established that I love buying wine at auction. On the one hand, it is fraught with danger but if you can handle disappointment, it is also a great way of trying new producers. I’m on a good run at the moment – after my discovery of Mayford, I’m pleased to report that this wine from Eldridge Estate (not to be confused with Eldredge in Clare …) over delivers and gives me another winery to keep an eye out for.

Gamay is the grape of Beaujolais and it is not often found in Australia (Wine Grapes says around 20 producers). Generally accepted wisdom is that the wines it produces are mostly best drunk young – so a 2011 from an unknown producer required a small leap of faith on my part.

If you are familiar with Beaujolais, this wine is much more in line with one of the cru wines, than the entry level Beaujolais or Beaujolais-Villages (not that there is anything wrong with either of those). If you’ve never tried Gamay before, I recommend finding a bottle of the Georges Duboeuf Beaujolais-Villages, which you should be able to find at around the $20 mark. These wines are more red fruit focussed than today’s wine, but they are a very solid and reliable introduction to both variety and style.

Elsewhere, you will find small amounts of Gamay grown in cooler climate areas, such as Germany, England, Switzerland, Oregon and Canada.

Very pale and definitely garnet in colour. On day 2 the nose is not looking quite as attractive as day 1 – but it is still pronounced, black cherry, some tobacco, leather, a touch of anise and black olive.

The palate is less fruit forward – there is some stalkiness which I personally find quite attractive – and it’s backed up with some black cherry and cassis. There’s good acidity and tannins are, as expected, very soft.

It doesn’t look as good on day 2 as it did on day 1 (hmmm, perhaps I should have been more forthcoming in sharing with Andy yesterday …) but I will most definitely be on the look-out for more wines from this producer and more Australian (nay, even Victorian!) Gamay in general.