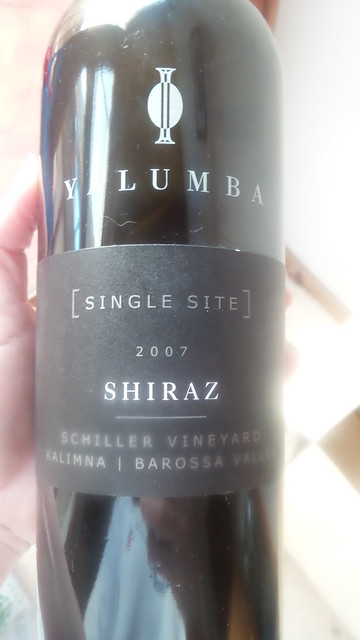 Another 2007 wine and completely by accident. Whereas last time we were in McLaren Vale, let’s shift north to the Barossa.

I first came across the Yalumba ‘single site’ Shirazes at the Negociants’ Working with Wine Shiraz masterclass last year. I can’t remember now exactly the wine we tried (and I don’t have my handouts immediately to … hand) but I was sufficiently impressed by the wine to spot this offering at auction. On release, this was $60 a bottle but I can see now that you can pick it up slightly more cheaply. I ended up paying around $55 – so a small saving.

For a while it has been sitting in our wine fridge (hmmm, another topic I’ve been meaning to write about for a while!) waiting for an appropriate occasion. Generally, ‘appropriate occasion’ in our house means that someone is thirsty. I also have the philosophy with my auction purchases that we only check out the price/value AFTER we’ve opened the bottle – that way we avoid the agonising over whether we really should open it …

In the glass, garnet and intense in colour – both as you would expect for an eight year old Barossa Shiraz.

The nose did seem quite muted but this may be a very unfair assessment as our house is most kindly described as bloody cold and I’m finding that wine tasting in winter is something of a challenge when it comes to service temperatures. Despite being shyer than you’d expect, the nose showed plenty of black fruit with a touch of licorice and vanilla.

The palate was a lot more forward – lots of black fruit and vanilla, with a meat and leather finish. There was good acidity and some pleasant soft tannins and the wine showed good length. I particularly liked that the savoury, slightly developed characters kicked in at the end.

The wine definitely has plenty of life left in it so if you are in possession of one or more bottles there is no need to rush.

We both felt that the $50-60 mark was a trifle high. Yes, this wine has been scored highly and reviewed well but my gut feeling is that there are other Barossa Shirazes out there at an equivalent price point which show a bit more complexity and character. Of course, I’m not comparing directly like for like, as the wines I am thinking of are all younger so be aware that this is a slightly unfair comparison …